The second stop on our drive across the Southwest was Petrified National Forest, the bottom “C” on the map below. After climbing cliffs and looking down into valleys at El Morro National Monument, it was time to see some of the red landscape Arizona is so famous for.

REMEMBER: It is illegal to remove petrified wood from the park!

The entrance fee to the park was $20 when we visited, and good for seven days. In addition to preserving a slice of geological history, Petrified National Forest is the only National Park to contain part of the Historic Route 66. On top of that, one of the first stops along the park road provides a gorgeous overlook of Painted Desert, shown at the top of this page.

With that being said, at the Visitor 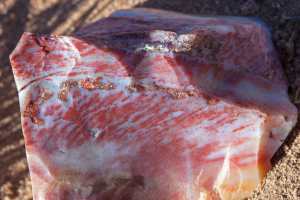 Center we decided to start the Red Basin Clam Beds “Off the Beaten Path” hike. The park website says the hike is 8.5 miles roundtrip, but the park brochure says it is 6 miles. We arrived in the early afternoon and only planned to hike a mile or two before turning back, so unfortunately I can’t say which length is more accurate. However, going all the way on this hike would require actual navigation skills. For visitors who prefer well-marked trails, there are many within the park to choose from. 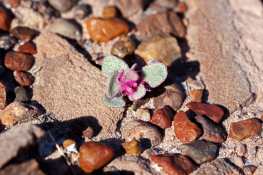 e probably didn’t even make it a half-mile into this hike before losing interest and turning back. The real reward would have been seeing fossilized clam beds a couple of miles in, but we felt our remaining daylight time would be better spent doing the aforementioned shorter and bigger “bang-for-your-buck” hikes. Plus, we had spent 45 minutes on the first half mile just picking up various petrified wood and examining it, and I was having a lot of fun with my macro lens. 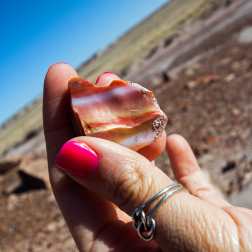 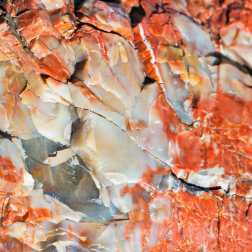 So what is petrified wood? In the simplest sense, it is the fossil of a plant. About 225 million years ago, during the Late Triassic and early Mesozoic eras, the present-day northern Arizona was near the equator – a tropical forest at significantly lower elevation. Enormous trees died here, and covered the forest floor. Rushing waters from tropical storms in the surrounding mountains covered the downed trees quickly enough to prevent any decay due to oxidation or insects. Nearby volcanic eruptions were also blanketing the forest in volcanic ash, which has a high silica content. As the silica dissolved, it settled in to replace the buried flora, while maintaining the same structure of the original trees. Today, we see this as petrified wood. Mixed metals, in addition to the silica, give the rocks a rainbow variety of colors. Today, we know the mixture of plant debris and dissolved sediments as the Chinle Formation.

Over time the land lifted and shifted, and mud and other rocks were washed away, leaving behind just the petrified wood.

After getting up close and personal with the petrified wood on our attempted hike, we decided to drive to the end of the park and explore the Giant Logs Trail, a short 1/2-mile loop showcasing the park’s largest petrified trees. The largest of them, Old Faithful, has a diameter of about 10 feet, a length of about 35 feet, and weighs an estimated 44 tons!

We were originally planning on seeing Meteor Crater instead of this park, but took a bathroom break and leg stretch here instead. I’m glad we did, because the park was a great side excursion for the afternoon, and I don’t feel that we missed out on anything by not staying longer. There wasn’t any one thing about the park got me too excited, but everything combined (the petrified wood, Painted Desert, stratified rock layers, Old Faithful), made it a worthwhile experience.