One of the first places we visited after I arrived in Israel was Tel Aviv and the Old City Jaffa. Anton had described Tel Aviv to me as Israel’s version of New York City, where you can find parties and nightlife even during religious holidays. I had no expectations before arriving in Israel, so my curiosity was piqued by this. He also added that to really experience all the amazing things Tel Aviv has to offer, you need to visit with a local (i.e. not him). Nonetheless, we tried to get a good feel for the city in the short time we had.

We started in the morning, meeting up with his sister, brother-in-law, and niece along the Tayelet Beach promenade, which forbids swimming, but as you can see in the photos below, is really more of a suggestion than an enforced law. From there we headed downtown to grab some lunch and explore the city.

Our first stop was the Carmel Market, or Shuk HaCarmel. It put our little Rochester market to shame! One of the most famous markets in all of Israel, it simultaneously felt Mediterranean and Middle Eastern, with a plentiful selection of salty fish and an enormous variety of spices I had never heard of. With the food came the expected shouting and bargaining in multiple languages, clothing stalls and open bars.

As an aside, I am used to people assuming I speak English when traveling abroad. In Israel, everyone assumed I was Russian. This could possibly be because I was walking with a Russian, but I was led to believe it’s a standard assumption for Caucasians in Israel. It’s probably a fair guess considering more than a million immigrants from post-Soviet states flew into Israel after the fall of the Soviet Union.

Back to the market, our goal was to stop at a one-time favorite of Anton’s, the Beer Bazaar, but it was unfortunately closed by the time we walked past. Instead, we got to see the piles of trash thrown into the street at the market’s conclusion for the day. Apparently there is so much trash it is much easier to simply plow the main road every afternoon. It’s a bit much to handle in flip flops though.

Trash piled onto the streets. 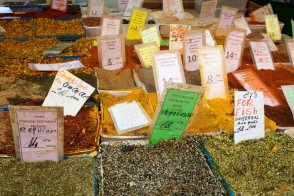 Exotic spices all around.

After the market we headed downtown and window-shopped while we explored. Honestly the most noteworthy part of this experience was stumbling across Dizengoff Center (דיזנגוף סנטר), a simply massive shopping mall. We only wandered in to find a bathroom, but spent at least an hour trying to get back out where we entered. This was obfuscated by the fact that the mall was closed and only certain entrances and exits were open. Even without crowds, we simply couldn’t figure out how to exit. Back home, Anton likes to poke fun at me for always knowing exactly where I am in a mall, where the exits are, where each store is, and the shortest route to get where we are going. In this mall we must have come across the same exit at least four times, each time thinking we had finally found an opening to the outside, only to be disappointed. And the stores weren’t even open for some detour shopping! As I write this, I ask Anton if he remembers and why he is completely unfazed. Apparently it wasn’t his first time in that mall.

After finally escaping the labyrinth later in the afternoon, we walked back along the Tayelet Promenade toward Jaffa, the oldest neighborhood of today’s Tel Aviv. The Jaffa Port has been in use for over 7000 years, and although Jaffa fell into decay as Jews migrated out to Tel Aviv, today it is undergoing a restoration. The city is a major tourist spot, as an addition to Tel Aviv or in its own right, and even though it is within walking distance of the main city center, it has a completely different feel. The narrow stone alleyways and blue accents were quintessentially Mediterranean, and although the neighborhood was just as much of a maze as the Dizengoff Center, it was much more fun to explore.

We found the Floating Orange Tree (also known as the Hanging Tree), which I had heard of but found it very anticlimactic. We saw dozens of alley cats, which I found quite strange, but then again, Anton’s friends visited America and were surprised by the lack of stray cats. And we stopped in plenty of tiny stores tucked deep within the labryinth. 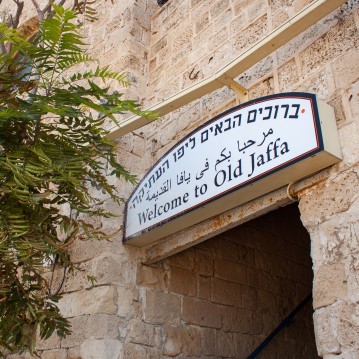 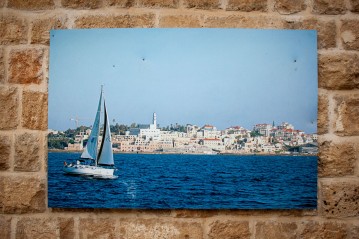 Many shops put free water out.

As daylight waned, we worked our way out of the maze of Old Jaffa so that we could enjoy sunset. We stopped by the Wishing Bridge, made a couple of wishes, and then took in a nice view of Tel Aviv. It was the perfect spot to enjoy sunset.

We didn’t do a lot of research before visiting Tel Aviv, and I’m sure there is a lot more we could have seen (without getting lost in the mall for an hour). Next time we will recruit a local to really show us around, and hopefully take in some of that nightlife.