I woke up, snuggled in my sleeping bag, warmer than I had ever been in a tent on this trip. I wished I had just used the camp-provided tents for my entire trip. The wind was still gusting outside, and I dreaded opening the flap to see the previous night’s disaster. But as I forced myself to peek my eyes open, I saw something bright inside the tent. That was all it took for my eyes to open wide. Sunlight?? I suspiciously opened the tent flap to confirm that yes, the sun had decided to show itself that day. It was still cold, and windy, but the sight of sunlight was encouraging enough to get me moving.

I took my time gathering my sprawled out belongings from the night before. A rain fly draped over the rafters of the warm room, snapped tent poles tossed into a corner, finally dry socks hanging by the oven, mostly dry boots in front of the oven. It seemed like all systems were go for my second-to-last day of hiking. I packed up, taking time to enjoy the dramatic clouds hanging over Lago Nordenskjold, and headed immediately into the starting climb of the day. 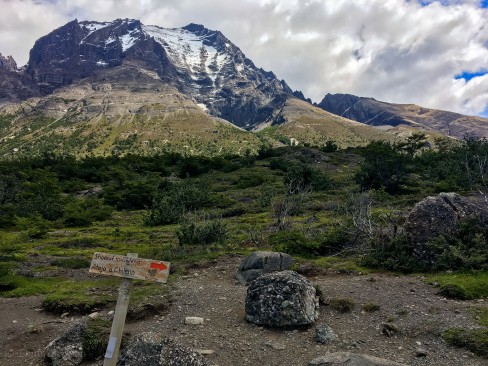 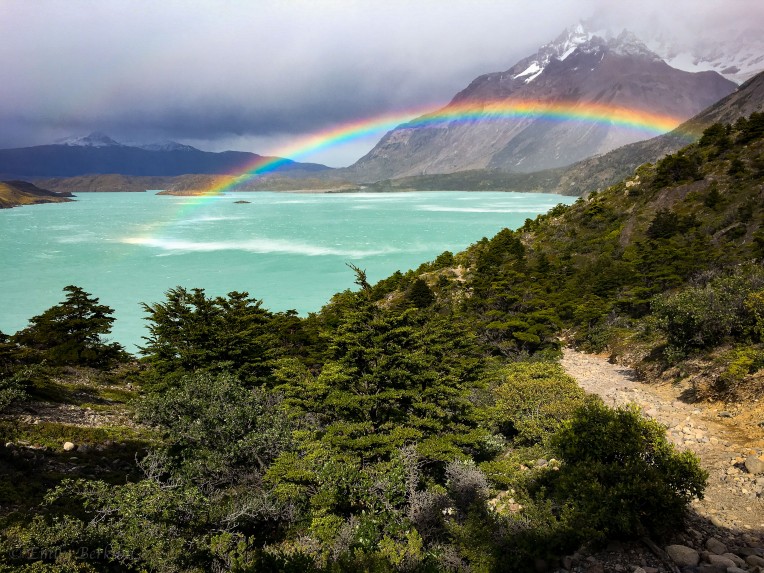 For all of the previous days tribulations, I was due two rewards. The first was the stunning rainbow that kindly stuck around long enough for me to reach the top of my climb and take some nice photos. End to end, it rose out of the tempest, cerulean waters of Lago Nordenskjold, and seemed to fall right onto Los Cuernos. The bright colors of the rainbow sharply contrasted the formidable, snow-capped mountains in the background, leaving me appreciative of the pockets of warm sunshine washing over me.

The second reward came as I passed someone on the trail for the first time. Granted, it was a family with small children, but I wasn’t about to let that drag me down. An achievement is an achievement.

The day’s hike was leisurely, and I even had to strip some layers when it got too warm. Soon enough I was passing the turnoff point to Campamento Chileno, which would bypass Hotel las Torres, where I had started. 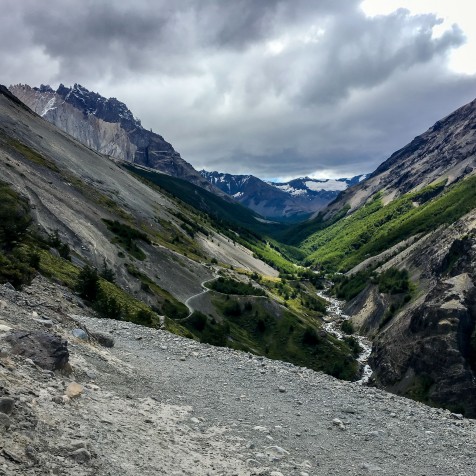 After the turnoff to Campamento Chileno, the trail gradually started to climb again. I had planned this because it would put me just about halfway up the mountain to the Mirador Las Torres, giving me a shorter sunrise hike the next morning. Entering the valley was like reaching the Promised Land after seven long days of physical pains I hadn’t experienced before, and yes, lots of wonderful new experiences along with that.

At this point I was certainly ready to start sleeping indoors again. Not for a bed, I could do without that, but the temperature swings were tough to bear. At the same time though, I was in no way ready to stop hiking this land. To this day, I would turn around and do the exact same thing over again (I’m even in much better shape now)! And even with eight full days of exploring the park, there was still so much I hadn’t seen. I could easily spend another full week here seeing entirely different viewpoints, animals, geology, and yes, even weather.

Maybe I’m more of a hiker than a backpacker. Or maybe I was simply unprepared, with a too-heavy pack, and not-quite-warm-enough warm gear. For sure, I have had much better luck on more recent camping and backpacking trips, on all accounts of my own preparation (and excluding weather).

But I digress. My trip wasn’t over yet! I had one final night (which also included a mandatory refugio-cooked meal) and the final push to a sunrise hike up to the grand finale, Mirador Las Torres.