Greetings all! This “day” trip is the big one, the most important one, the entire reason I’m living in Hawaii for four months. It doesn’t really qualify as a day trip however because it spanned four nights and four days. One of the perks of being an intern at Gemini Observatory is that we get to observe on Mauna Kea and see all of the behind-the-scenes action that most tourists don’t. There are several companies that take tour groups to the summit for sunset and sunrise, and the Mauna Kea Visitor Center does regular nightly viewing through public telescopes, from 6:00-10:00pm. Unfortunately, I cannot give much perspective on these tours because I’m here to work. My work really boils down to staying up all night, observing the observers, asking questions when they’re not busy, and trying not to vomit on myself or require an oxygen tank to combat altitude sickness.

Still, I will count this experience as checking off two things to do in my magazine: #33 (Look Through the Eyes of Mauna Kea) and #95 (Trek to a Star Party). In fact, I probably did #33 more extensively than most people since I had an 8-meter “eye” to observe with.

The drive from Hilo to Mauna Kea takes about 45 minutes and follows the route shown below: 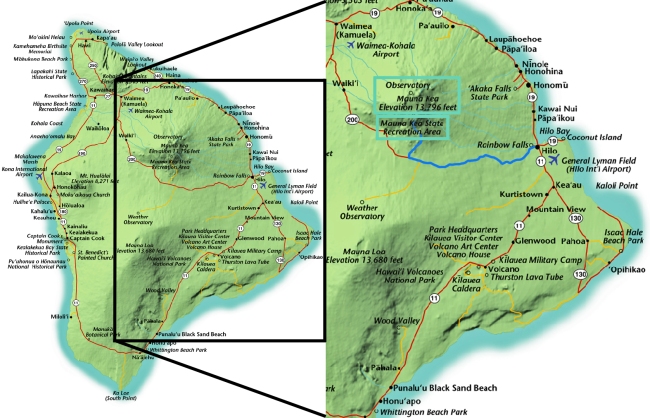 I’ll structure this blog post a bit differently from the usual itinerary format. The contents are listed below:

For anyone who is completely unfamiliar with my work or Mauna Kea, let me provide a brief description. Geologically, Mauna Kea is the tallest mountain in the world, extending 13,796 feet above sea level and 19,304 feet below sea level. Its nearby neighbor, Mauna Loa, is just a few dozen meters lower than Mauna Kea. The low lying (6000 ft) land between Mauna Kea and Mauna Loa make up what is known as the Hawaiian “saddle.” Formed as the Pacific tectonic plate drifted slowly over a hot spot, Mauna Kea is one of the youngest volcanoes in the Hawaiian chain. While it is currently considered dormant, geologists expect that it will one day erupt again.

In the meantime, astronomers decided that Mauna Kea was the perfect location to build some of the world’s largest telescopes. Coincidentally, telescopes are sensitive enough to register minute trembles beneath their surface, meaning they may one day predict the next eruption of Mauna Kea. But astronomers are more interested in the high-quality images that are made possible by placing telescopes on the summit.

Why is Mauna Kea the perfect location for one of the world’s largest groupings of astronomical observatories? The main concern in astronomy is always going to be improving image quality, whether that be by creating larger telescope mirrors or observing through less of the Earth’s atmosphere. (This second consideration is why Hubble Space Telescope gets such fantastic images, not because it is closer to the stars but because it is removed from our atmosphere.) There are more large optical telescope on Mauna Kea than anywhere else in the world, and at 13,796 feet elevation, they observe through much less atmosphere than other ground-based telescopes. The atmosphere on Mauna Kea is extremely dry and for the most part cloud-free.  A tropical inversion layer in the clouds lies far beneath the summit, and prevents the moist Hawaiian air from reaching the upper atmosphere. The nearest city is about an hour’s drive away, and low-pressure sodium street lighting prevents light pollution from interfering with astronomical observations.

Today there are thirteen observatories on the summit of Mauna Kea, operated by eleven countries. There are currently plans to commission a fourteenth telescope, the Thirty Meter Telescope (TMT). The TMT still has a long way to “first light”, but if constructed it will be the largest telescope in the world. Recently, a Master Agreement was signed by all international parties detailing their obligations to ensure completion of the TMT.

My internship is with Gemini Observatory, which operates one of the large 8-meter class telescopes on Mauna Kea. Technically, Gemini Observatory operates two 8.1-meter telescopes, one on Mauna Kea and one on Cerro Pachón in Chile. For those familiar with their constellation folklore, remember that Gemini represents the twin brothers Castor and Pollux. See the connection?

With telescopes in both the northern and southern hemisphere, Gemini astronomers can observe the entire night sky. The northern observatory was completed in 1999 and it is equipped with adaptive optics, a laser guide star and the capability to preform multi-object spectroscopy.

Gemini is owned and operated by the United States, Canada, Chile, Brazil, Australia and Argentina. To get a rough idea of how much time each country gets on the telescopes, follow this link.

Added Gemini bonus: The actual summit of Mauna Kea is sacred to the Hawaiians, and no observatories can be built there.  While Gemini is built at a slightly lower elevation than the summit, the dome itself is taller than the true summit. The top of the dome reaches 13,973 feet, and when standing on the dome floor you are standing at the tallest point in the entire Pacific ocean!

Even after working on Kitt Peak for three years and observing with the 90″ Bok Telescope, the Multiple Mirror Telescope (which coincidentally is no longer multiple mirrored) and the Large Binocular Telescope, observing with Gemini was a totally different experience. All of the observatories I’ve been to in Arizona use “classical” observing, while Gemini uses something called “queue” observing. In fact, Gemini was one of the first observatories to successfully implement this observing mode.

To observe the night skies with Gemini, astronomers must submit proposals clearly stating their goals, why their research is important, how much time they need with which telescope instruments and what sky conditions their program requires. Any astronomer from the six member countries can apply for time, and their proposals are reviewed individually by their respective countries. If a proposal is selected as high quality it is forwarded to the International Time Allocation Committee (ITAC), where scheduling constraints are resolved. The ITAC is formed by representatives from Gemini Observatory (the Hilo base) and from each member country. During this process, the programs are assigned a ranking of Band 1-3. Band 1 is made up of the highest ranking proposals, and these programs have at least a 90% chance of being observed at some point in the six-month period. If they are not observed, they are eligible to be rolled over into the next six-month semester. Band 2 has a 75% completion rate, and 80% of started programs in Band 3 should have at least 75% of their program completed. These statistics can be found here.

In the “classical” observing mode, if an astronomer has their program approved, they get a set amount of nights to use the telescope. They have no idea what their chances are of getting good quality data because it all depends on the weather during their nights. In “queue” observing, the astronomers do not have to be at the telescope because Gemini staff observes the targets for them. Everyday, a member of the Gemini staff will come up with many observing schedules for different sky conditions, giving Band 1 programs priority. With this method, several programs can be observed and potentially completed in one night. In many ways, it is much more efficient than “classical” observing, because astronomers are able to select the exact amount of observing time they need, rather than get telescope time in full-night chunks. At night, Gemini has two SOSs (science operations specialists) working at the telescope: one to run the telescope and the dome, and one to gather the science data using the preset plans.

How does observing on Mauna Kea work?

My time on Mauna Kea stretched from Sunday-Thursday. Because we are working at 13,796 feet, altitude sickness is a serious concern. When guests visit the summit, they must wait at base camp (9000 feet) for at least an hour. The workers spend up to an entire night acclimatizing. Not only are we acclimatizing to the lack of oxygen, but we also have to switch our sleep schedules from night to day. Most of the Gemini nighttime employees prefer to leave Hilo in the middle of the night, as it helps them to stay up later. I arrived at base camp around midnight, and although I was supposed to stay up as long as possible, I instead took a three-hour nap and woke up at 3:30am to do some astrophotography. I specifically requested to visit Mauna Kea during a Gemini laser run, and unfortunately that coincided with full moon. The early morning of my acclimatization night was the only dark time I had for photography, so at 3:30 I stumbled around in the dark for 45 minutes to find the trail leading up to a nice overlook of the base camp and Mauna Loa.

Once twilight hit, I realized I didn’t want to walk back to base camp in the dark, so I decided to wait until the sun rose. I’m glad I did! Below are a few photos taken during and shortly after sunrise.

By the next night I was supposed to be acclimatized to living at 9000 feet, and ready to make the ascent to almost 14,000 feet. Feeling slightly nervous, we started driving the 8-mile gravel access road around 6:00pm. The road is graded twice a week, so the ride there wasn’t too bad. However, only 4WD vehicles are permitted to drive all the way to the summit.

Once at the summit, I received a brief tour of the major observatories and then went to open the dome. This was a surprisingly quick process, only about fifteen minutes total. Before I knew it, we were ready to start observing. Throughout the night I experienced mild bouts of lightheadedness, but some pressure breathing cured that. By the second night, I was starting to adapt quite nicely. Each night I spent some time outside taking photos, but I also got to run the science observations several times. Even in the middle of September, the temperature drops to 35° F, and with the wind speeds at ~20 mph, standing outside is an extreme challenge!

Below are some of the images from the three-night observing run.

Finally, a few photos taken from inside the telescope dome.

It was a fantastic four nights, and even though the moon was full, I’m glad I chose to see the lasers propagate. The weather was phenomenal for the most part, and the SOSs I worked with were amazing at answering all of my questions and letting me be involved in the data gathering process. I always thought I would be an awful telescope operator because I have trouble staying up past 3:00am, but staying awake for this experience was no problem at all. This has easily been the peak of my Hawaii experience (no pun intended).

Next Up: Things To Do In and Around Hilo