On our third and final day in Maui, we took it easy and spent the morning at the beach before heading northwest to take in a natural attraction and some nightlife. 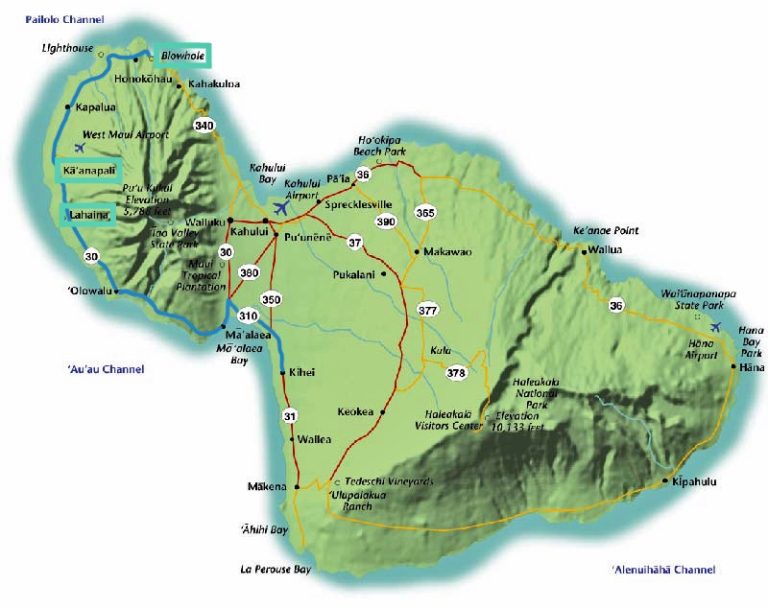 Laze on a Beach

Lahaina is a historical whaling town that runs along a single street, a little over a mile long. The street runs right next to the ocean and it is jam-packed with restaurants, shops, art galleries and people. I expected Lahaina to be like typical beach towns, where the same store is found on every block, and most stores sell the exact same thing.  However, the stores in Lahaina were surprisingly distinct. It may not be the best town if you don’t like crowds, but it was a fantastic place to spend a couple hours picking up some souvenirs and strolling through history!

Nakalele Blowhole is practically on the northernmost point of the island, and a spectacular sight to behold. There are two parking areas near the 38-mile marker along Highway 30. The parking lot right after the 38-mile marker going clockwise around Highway 30 provides a longer, but more interesting hike according to the guidebook we were using (Doughty). And I have to say I agreed! Our hike started over fairly even rolling hills, although we were warned that we were hiking at our own risk (dun dun dun).

There are many intersecting trails, but we followed ours through a small gulch and to the left, toward the ocean. As we walked along the ocean we saw dramatic scenery at every turn. The rocks and boulders reminded me of lava rocks found throughout Hawaii Volcanoes National Park, although they were probably formed in large part due to the powerful ocean waves.

After following a fairly direct route, we found a blowhole, releasing a steady stream of water. This was exciting by itself, compared to the Halona Blowhole from Oahu Day Trip I, but we quickly realized it wasn’t the blowhole. This was just a complimentary bonus on our walk, which we wouldn’t have seen if we had parked at the other lot.

Not five minutes later we found the real Nakalele Blowhole, and ended up standing above it! Unfortunately we were also downwind at the time, so right after this photo was taken we both quickly turned around to receive a good splashing. Thanks to good reflexes, both of our cameras were safe. And thankfully we caught this burst, because it was probably the highest we saw during our visit!

After a few minutes of viewing the blowhole from above, we left the splash zone and carefully climbed down the slippery rocks to view the blowhole with everyone else. The sinking sun lit up the coastline beautifully.

As the sun got lower and lower in the sky, we decided it was time to head back toward Lahaina for dinner and our evening show. On our way back, we spotted a few more sights of interest.

Take in a Show

After leaving Nakalele Blowhole, we stopped in Ka’anapali for dinner at the Hula Grill on the recommendation of a previous visitor. The restaurant was extremely crowded and seating was confusing, but the bread and chili pepper water were to die for! Dinner and drinks were also good, but the chili pepper water was good enough to purchase some for home.

After dinner we went to Warren & Annabelle’s Magic Show, where we spent two straight hours laughing. We entered the lounge in an “interesting” fashion, where we had an hour for hors d’oeuvres and drinks. The magic show itself went on for two hours and like I said, we didn’t stop laughing once. It was an intimate theater, with only five rows of seating. Some guests were selected to sit close enough to use the stage as a desktop. Warren was in fact hilarious, but probably spent more than half of the show telling jokes. There was a very long segment of asking guests what their jobs were, and providing a joke for each one. There was a big deal made over getting a guest to leave the room to play a joke on him, and there was a segment on state trivia.

Overall, I’d have to say that I enjoyed the magic much more at a Penn & Teller show in Las Vegas. I was excited when Warren offered to explain three tricks to us, but he never did. Penn & Teller spent their entire show doing magic and explaining a good portion of the tricks as well. There was also a good amount of Warren rummaging around behind the stage “cleaning up,” but it seemed more like he was preparing upcoming tricks. So unfortunately, I can’t say the magic was too impressive, but we were consistently entertained for the full two hours. I don’t regret going at all, but I’m not sure if I would go again.

After a great fun-filled night, we headed back to Kihei and got ready to head for Kauai the next day.