Our third day in Kauai was again sunny so even though we were sore from the previous day, we charged ahead and decided to do our second hike along the first two miles of the Kalalau Trail. This was also our day to tour the northern part of the island, including a stop in Hanalei and at Kilauea Lighthouse, the northernmost point of the island. The usual map is shown below with the drive and our stops overlaid. 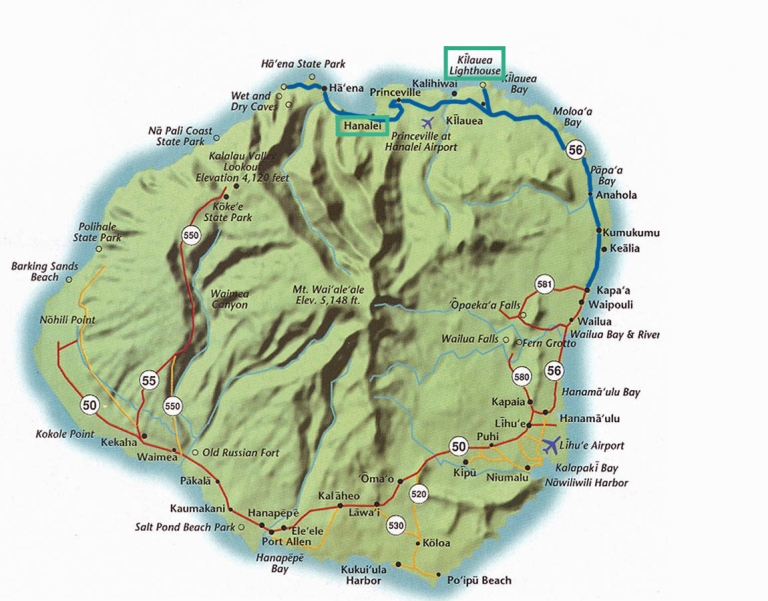 End of the Road, Kalalau Trail

If you’ve been reading the previous Kauai blogposts, you’ll know that the Kalalau Trail has been listed as one of the ten most dangerous hikes in America by Backpacker Magazine. Aside from worrying about staying hydrated and carrying a heavy backpack on the 11-mile journey to Kalalau Valley, hikers also have to beware of the crumbling rock and sheer cliffs they hike dangerously close to. (For a bird’s eye view of Kalalau Valley, click here).

The trail starts at the end of Highway 560, on the northern part of the island. We saw cars parked for a mile along the road before it ended at Ke’e Beach and the infamous trail. Most people take three days to complete this trail, although we met a hiker who had been living in Kalalau Valley for two months; he only came out to help some other hikers carry their gear. Like many people just here for the day, we only hiked the first two miles to Hanakapi’ai Beach (some hikers do the first four miles to Hanakapi’ai Falls).

After the first half-mile, you emerge from the forest and look down on Ke’e Beach and some of the bluest water you’ve ever seen.

The trail ascends and descends several times in just two miles, climbing in and out of valleys along the Na Pali coast.

After about a mile and half, we began to catch our first glimpses of Hanakapi’ai Beach, which looked extremely inviting after our past hour of climbing!

In a short time we had finally reached the beach, but only after crossing a large stream by hopping inconveniently located rocks. Rather than hop and slip, some people preferred to just walk across the stream regardless of how high it was.

Our hike back to Ke’e Beach seemed much shorter, as it always does, and after a quick swim at Ke’e, we were on our way to Hanalei for dinner.

By the time we got to Hanalei it was drizzling outside, and we were starving from our hike and skipping lunch. After a quick look around we wen to Bubba Burgers, which I can only assume is like the Five Guys or In-N-Out of Hawaii. The burgers were okay but the fries were tasteless; however they did have dozens of photos on the walls of famous celebrities who had stopped there, such as Ben Affleck, Bill Clinton and Robert Downey Jr.

After that welcomed meal we did a bit of shopping for some Hawaiian shirts and souvenirs.

Kilauea Lighthouse sits on the northernmost tip of Kauai. Built in 1913, it guided ships traveling between Hawaii and the Orient. It also played a crucial role in realigning the pilots attempting the first flight from California to Hawaii in 1927. The lighthouse is now on the National Register of Historic Places and receives hundreds of thousands of visitors per year. We arrived just as the sun was setting.

We arrived back in Kapa’a in the early evening, and not wanting to retire just yet, we decided to walk along the town’s main street where the First Saturday Art Walk was going on, which happens once per month. Stores were open later and hundreds of local vendors were selling their work.

A nice, bustling town, Kapa’a was the best place for us to stay because it placed us halfway between the northern and southern portions of the island.

We had four complete days in Kauai, and it turned out to be good planning that we did the hiking in the middle. Our last day was mostly rain and we spent it walking through some of the malls in the resort area down south. We also visited Spouting Horn Blowhole down south, but it doesn’t warrant another day to itself (the one in Maui was better, at least that we saw). After that, it was off to Oahu again.

One thought on “III: Kalalau Trail”