On Day 5 I woke up, still in pain from the previous day’s hike, but feeling optimistic. I was back in civilization, people were now hiking the trail in both directions, and the day’s hike was shorter than yesterday. As for my knees, painkillers had me feeling back to my standard 75%. Shortly after leaving Campamento Grey, the skies cleared and the sun kissed the earth. Even with the usual strong winds, I was able to hike in short sleeves for the first time. I should have known that Mother Nature would require payment later on, but for the time being, it was delightful.

The day’s hike had a bit of a climb, but nothing like the previous day’s effort. After reaching the top, we turned away from Lago Grey to descend to Paine Grande. It was along this stretch that I met the trail-blazing park guide from Utah and Alaska who did the entire backside of the park in two days. She was an absolute machine!

Aside from the river running through the forest on the way to Campamento Los Perros, which reminded me of New York, nothing along the hike had seemed “normal” to me. It had all been exotic, and at times, other-worldly (looking at you Glacier Grey). The approach to Refugio Paine Grande however, was something I could relate to. It was strangely reminiscent of the desert scrub of the highlands in the American Southwest, provided you didn’t look too far ahead and see the cerulean waters of Lago Pehoé. I wouldn’t have been surprised to come across a cactus or two. 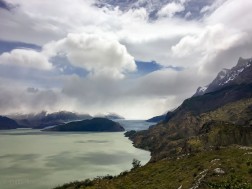 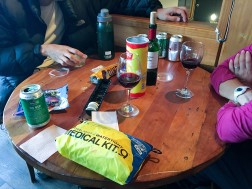 Like Campamento Grey, Refugio Paine Grande was picturesquely situated in front of a snow-capped mountain. This was the second and final night I had splurged to stay indoors at the refugio. I located my room and picked a bunk, and immediately headed out to make some food. Once fed, I grabbed some snacks from the general store (they were getting much larger and better-stocked) and joined some friends for cocktails again.

I also managed to get in touch with my family for the first time in five days. Similar to meeting old friends at Campamento Grey, I felt like ages had passed since I last spoke with my family and boyfriend. I had so much to tell them, and I asked them questions about their life as if we hadn’t spoken in years. I was almost dumbfounded when they told me “no, nothing much new going on here,” because in Patagonia, it was as if exciting new things were waiting around every corner.

At this point in the hike, more than half-way done, I was feeling so positive that I could have slept outside in my tent. Indeed, someone in my dorm room was snoring quite loudly, making it a tempting option. But I still welcomed the warmth of sleeping indoors, knowing I had two final nights to complete, and they would most likely be cold. At the very least, I got to take my first (actual) hot shower of the trip, and wash out my mud-caked socks. Life was good.

Perhaps it was for the best that I slept inside, as the next morning I learned that several peoples’ tent poles had snapped in the night’s gusty winds. As for me, it was time to pay for the pleasant weather of the previous day.