It’s been a little while since the last post, but here’s a new one, and there are plenty more to come! This past weekend my roommates and I went to Hawaii Volcanoes National Park on Saturday. This trip checked two more items off of my magazine’s list: #38 (Ride the Hele-On Bus For a Buck) and #1 ( Get a Front-Row “Hot” Seat). This will be part one of the trip to Volcanoes National Park, because there are many more hikes that remain to be seen. This weekend’s journey is shown on the map below. 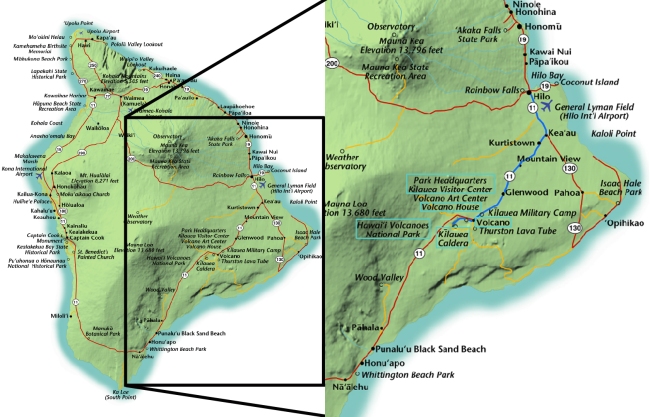 Our day was pretty simple in terms of timing; a sample schedule is shown below:

Ride the Hele-On Bus For a Buck

The Hele-On bus came recommended in my magazine as a top 101 things to do on the Big Island. While the bus isn’t good for many things (i.e. getting around Hilo on a day-to-day basis), it seemed like a great idea for getting to Volcano and Kailua-Kona. Most of the taxi drivers in Hilo tend to be a little bit iffy on whether or not they actually show up when you call them, or whether they work when they say they do, so we were a little bit apprehensive about taking the city bus down to Volcano. We were pleasantly surprised when it did show up right on time, and did in fact only cost $1. Even better, our student IDs worked to get us on for free, despite not being University of Hawaii-Hilo IDs. Our bus was not crowded at all, and it was a fairly quick hour-long ride to get to Volcano from Hilo, with several stops along the way.

Get a Front-Row “Hot” Seat

The Hele-On bus dropped us off right in front of the Volcanoes National Park Visitor Center, where we quickly realized Big Mistake #1: we forgot we would be going up in elevation. It was significantly colder in Volcano than it had been in Hilo. The chill and rain put somewhat of a damper on our morning as we were all cold and not sure about which hikes to take. For any adults reading this, it will be a much more fantastic experience with a car, as many of the great hikes require short drives to start. However, there were several close-by, mile-long hikes we opted to explore. The first we stumbled upon was Sulfur Banks, which was extremely reminiscent of Yellowstone National Park. 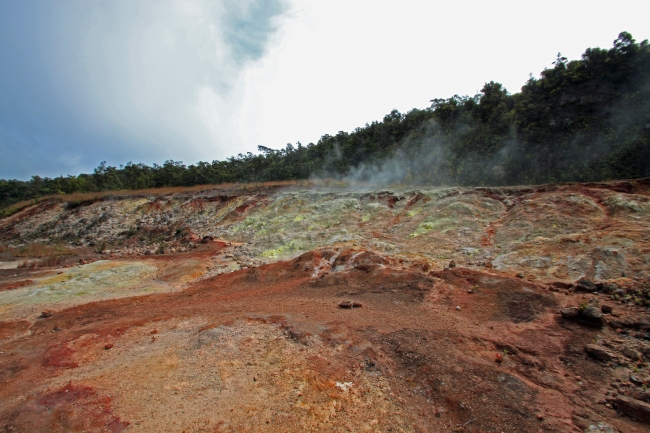 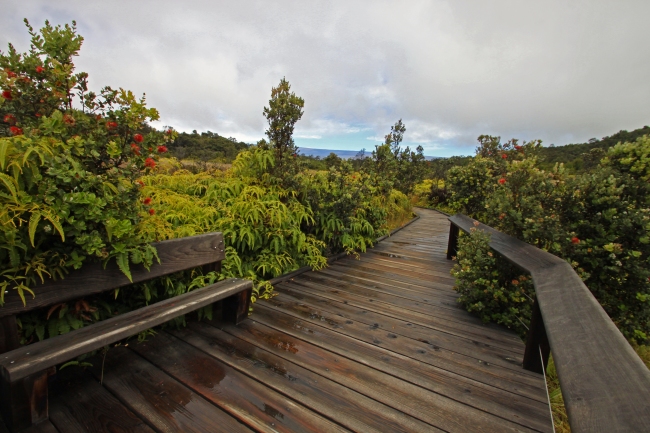 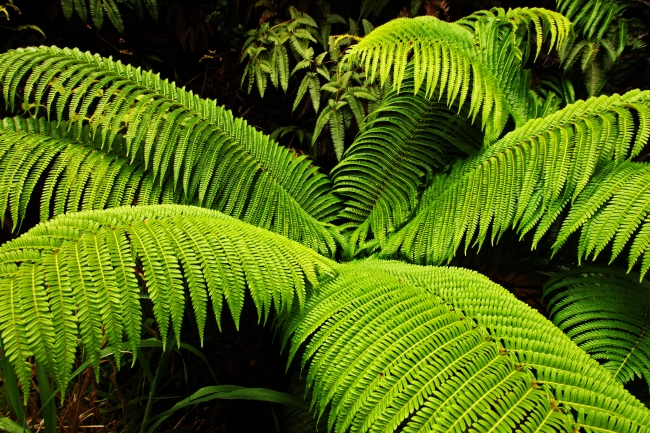 After finishing Sulfur Banks trail, we crossed the main road Crater Rim Drive, to the central side of Kilauea Crater. At this point we didn’t really have a plan, nor did we know exactly where we were, so we decided to follow the only trail in sight and see where it took us. We could tell we were overlooking a vast lava field, but had no idea the extent of how large it was due to the clouds and fog. Based on how many other people we saw in the park (none) we were probably the only ones willing to tough it out with the awful weather (harsh winds and sheet rain). We also debated turning back at several points, but as we didn’t have bus transportation until 3:25 at the earliest, we decided to keep going. When the clouds momentarily broke, we could see a large crater off in the distance, within the lava field we were already looking down on. It seemed pretty close by, so we made that our turn-around point. Only later did we realize we walked a route that most people drive. It was seemingly a couple of miles, but seemed much shorter than that when we didn’t have any idea where we were going. 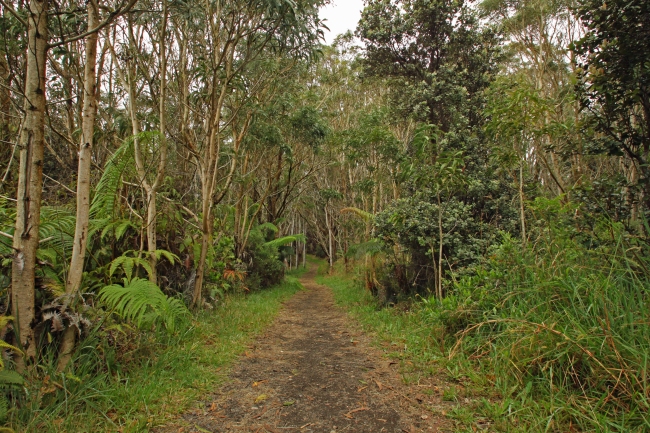 Many sights like the one above were on this hike, including several vantage points overlooking the lava field. Eventually we came to the conclusion that we were hiking the Crater Rim Trail, an 11 mile hike that was closed right where we finished, coincidentally. We walked about four miles round trip, but it certainly didn’t feel like that. It was also a surprisingly level hike the entire way.

The point we wanted to get to turned out to be Kilauea’s summit caldera, found right outside of Jaggar Museum, which includes the history and current activity of the volcano. This is where the cars typically drive up to, snap a few pictures, and go on their way. If you really want to hike, walk like we did! It was a great experience, even in the cold rain and wind. Our return visit will require a car, because we want to go to this overlook again at night when you can actually see the glow of lava. Perhaps we will just drive up that time. Below is one of many panoramas I tried taking of the crater. Click to enlarge!

After spending awhile warming up at the Jaggar Museum and overlook, we decided to head back on our original path. It seemed even quicker this time since the Sun was beginning to come out and it was warming up. When we were almost back to the Visitor Center, we took a mini-detour along the ‘Iliahi (Sandalwood) 0.4 mile hike. 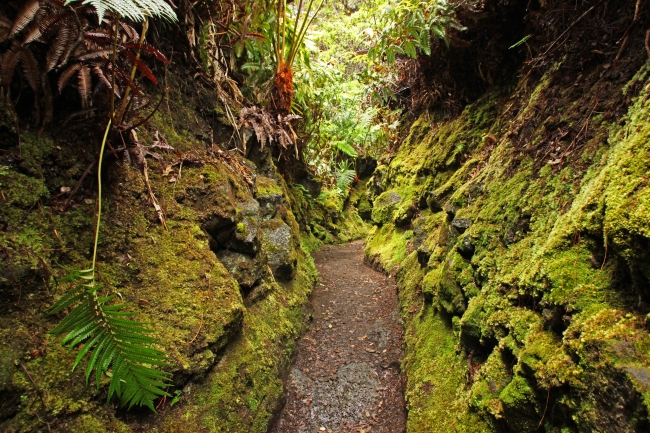 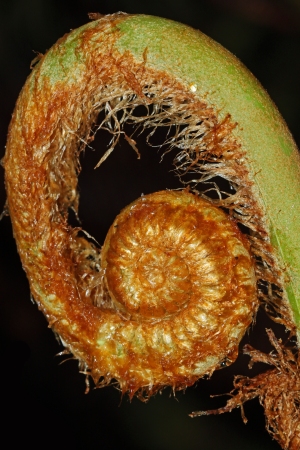 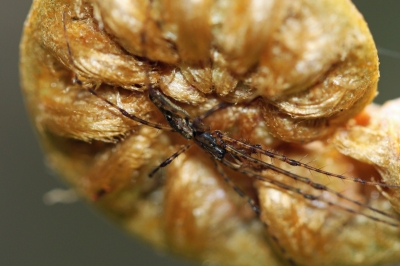 I also present you with my favorite macro picture ever, shown below. Through a bit of exploring, we found these fiddleheads, the precursors to ferns. 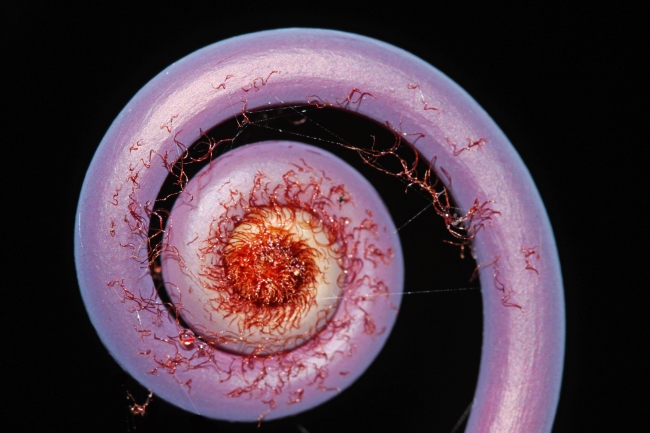 The ‘Iliahi hike is actually a 1.5 mile loop, but we only took part of it back to the Volcano House, where we got lunch. The Volcano House is a small lodge with a beautiful restaurant overlooking the crater. You do seem to pay for the view here, but the food was decent and it felt great to sit down and relax after hiking through the wind and rain during the early part of the morning.

After lunch we had another hour or so until our bus left for Hilo. We decided to walk 0.1 miles to another crater overlook, where we promptly laid down on the asphalt and took a nap in the warm sunlight. Never before has laying on asphalt felt so amazing. We took the 3:25 bus back to Hilo in hopes of catching the Super Moon rising that night. Unfortunately, Hilo was cloudy as always, and we did not get to see it rise. We spent the last few hours of the day walking around downtown Hilo and found a great little Italian restaurant called Pescatore to finish the day at. 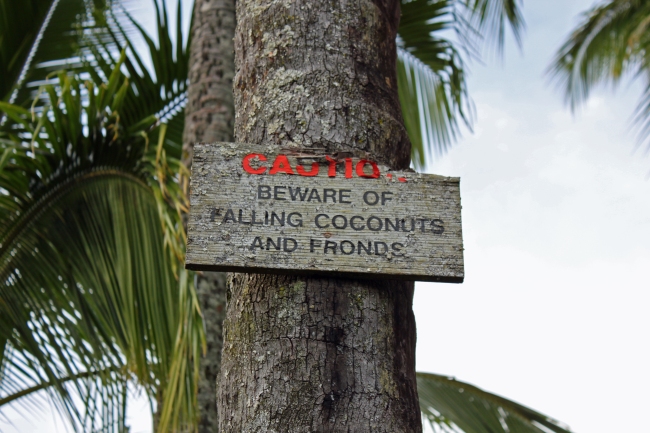 There will most definitely be MORE trips to Hawaii Volcanoes National Park, because there is plenty more that remains to be seen!