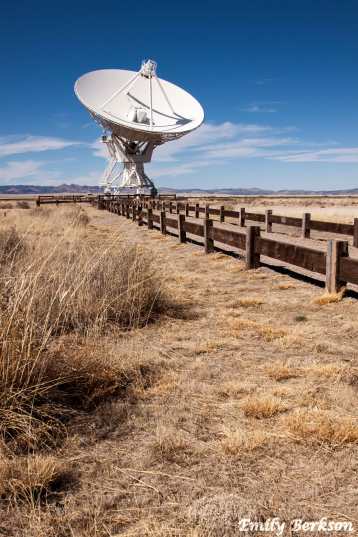 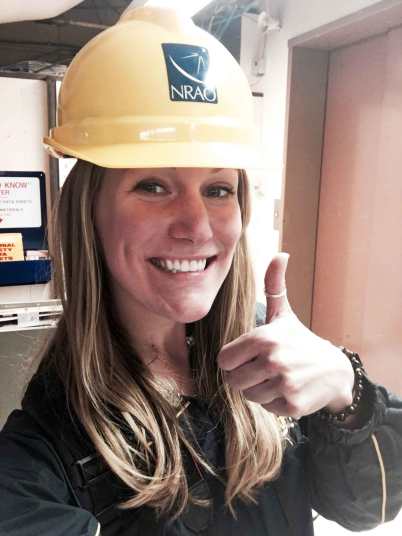 A couple of weeks ago I had the opportunity to visit the Very Large Array in New Mexico, where 27 radio telescopes almost continuously observe the night and daytime sky. This was a different experience for me, coming from optical astronomy where everything is done at night, so thankfully we had a great tour guide, Blythe Guvenen. Blythe was one of my coworkers on Kitt Peak and now works for the radio array here in New Mexico, so we got the behind-the-scenes tour, and even got to climb up into one of the radio dishes, 90-feet off the ground. And as a special bonus, Blythe agreed to write a guest blog post, about his work and the major discoveries made at this site! (Images and captions are my own.)

Of all the major sciences, radio astronomy is one of the newest. The discovery of radio waves from space was announced in 1933, less than a century ago. The discoverer: a young engineer by the name of Karl Guthe Jansky. Jansky was commissioned by Bell Labs to investigate sources of interference in transatlantic telephone transmissions, which manifested as static during calls. After all ground-based sources of strong radio sources were catalogued, there remained an elusive background hum that was eventually traced to a point in the sky. Even more interestingly, that point appeared to rise slightly earlier each day. Anyone who observes the night sky for long enough will realize that objects crest our eastern horizon roughly four minutes sooner than they did on the previous day, due to the Earth’s orbit about the Sun. The origin of this bright radio signal was in fact the center of our galaxy, the Milky Way!

Ironically, the first radio astronomy paper didn’t appear in an astronomy or even a science journal, but in an engineering publication. Even so, from that point forward the race was on to build ever-larger and more sensitive antennas to begin probing the invisible cosmos. In 1956, the National Radio Astronomy Observatory was founded, and 1980 saw the official dedication of the Very Large Array in New Mexico after a construction amounting to $78.5 million before inflation.

The VLA is a collection of 27 radio dishes in a Y-shaped pattern. Each dish is 25 meters (82 feet) across. The signals from the antennas are combined by a powerful computer, and it has the effective sensitivity of a dish with a diameter of 130 meters, or the resolution of a single telescope 36 kilometers, or 22 miles, across.

West-central New Mexico is the perfect location for an instrument of this sensitivity, since it is relatively radio-quiet and the remote plains of St. Agustin, on which it is built, lie at an elevation of 7,000 feet, allowing for greater signal clarity at higher frequencies — shorter radio waves often get scattered by moisture and thick columns of air. The closest major patch of civilization is the town of Socorro on the Rio Grande, about 50 miles east, where the main science operations center is based and where most of the staff live.

The array runs 24/7, since the sun’s glare isn’t an issue, and there a large maintenance crew working four days a week to keep the instruments and machinery in tip-top shape. Projects on the observatory are prioritized based on the research proposals, weather, and ideal observation times. The dishes are fully steerable and can point to any point in the sky above 8 degrees of the horizon, and can track sources with high accuracy. An on-site or remote operations specialist is responsible for the overall smooth functioning of the system and ensuring high data quality.

The antennas all sit on concrete pedestals and can be moved along railroad tracks for maintenance or rearrangement. Roughly three times a year, the entire array is reconfigured into a wider or tighter arrangement to get different “fields of view” and resolutions. There are four distinct configurations: A, B, C, and D. A is the widest, with each arm of the Y around 13 miles long. To the contrary, in the D array, the antennas are practically scraping together. The A array provides the greatest resolution, D, the widest field of view. 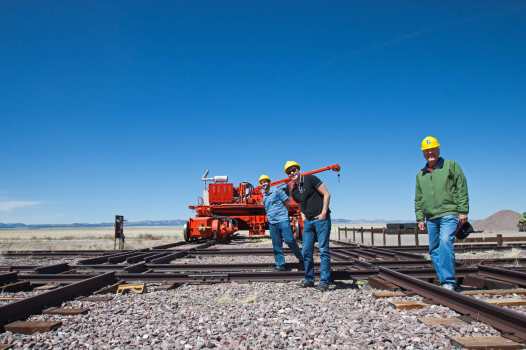 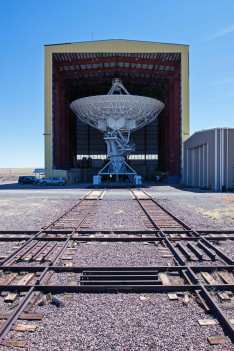 Antennas are picked up and moved by two custom transporters, which have a maximum speed of five miles per hour. They travel along the arms and rotate 90 degrees to place the antenna on its appropriate “spur” of the track. Occasionally an antenna is moved into a giant assembly building for upgrades or repairs. In reality there are actually 28 antennas: 27 always on the array and one always being serviced.

There are several different receivers for different wavelengths or bands, much like tuning your car radio to the appropriate station. Radio waves bounce off the main dish surface, onto a secondary reflector above the dish, and into feed cones in the center, where the cryogenically cooled receivers are waiting. The signals are then amplified and sent via fiber optics to a supercomputer called the correlator. There, the signals are cross-multiplied to create an interference pattern, and this helps build and image of the radio source in question. The correlator can handle quadrillions of calculations per second!

Although radio light is invisible to humans, it is no less real than the optical light we depend on. What’s special about radio is that it can travel unimpeded through clouds of gas and dust and reveal their inner structures. One example is circumstellar disks where planet systems form. Radio waves can peer into the disk and see baby planets in the process of formation, which in turn can tell us about our own origins. Radio waves can also serve as an identifying marker for certain chemicals. Absorption and emission at certain parts of the radio spectrum can allow us to detect complex molecules like formaldehydes, alcohols, and sugars. Many of these compounds are the elementary pieces of hydrocarbons and amino acids: the building blocks of life. Major discoveries with the VLA include the first clear imaging of ultra-fast cosmic jets, revealing in detail the obscured center of the Milky Way, finding the first microquasars, and imaging the first “Einstein ring” gravitational lens.

The VLA is a testament to the awesome power of the human mind and it is a stark contrast of technology and natural beauty. It is a scientific landmark and even more relevant and powerful now than when it opened, thanks to continuous upgrades and improved computing power. Its rededication as the Karl G. Jansky Very Large Array in 2012 serves to remind us of the humble roots of radio astronomy and how simple questions can lead to unexpected and profound answers.