Potsdam is a decent-sized city located just outside of Berlin along the Havel River, and served as the home base for my two-week trip to Germany back in 2016. It almost makes me sad to think back on this trip, because I will never be able to duplicate it, anytime, anywhere. The stars aligned to make it a dream vacation, and that’s with working for 8-9 hours a day. The weather was outstanding: mid-70s every day and sunny, with no humidity, aside from two short storms when I arrived in Berlin and was leaving Hamburg. In addition, our nice hotel and all of my meals were covered by my internship, so it was essentially a completely paid for vacation with fantastic weather. On top of that, Potsdam was a beautiful, beautiful city, and my 8-hour workdays were spent in a great class learning an interesting software. I certainly paid for the outstanding weather during my dismal trip to Scotland.

Potsdam is the largest city in the German state of Brandenburg, but had a very small-town feel in my opinion. Every day we walked to work along pleasant city streets with beautiful architecture, and on several days after work I went for a jog to the outskirts of the city. I always felt safe, even walking around at night after grabbing dinner and drinks with my coworker, instructors, and classmates.

We stayed at Hotel Am Jägertor, which, interestingly, did not take any payment information from us until we checked out at the end of our two-week stay. Not during the reservation process, not when we checked in, nothing. As far as we could tell, we could have walked right out of the hotel on our final morning and not been charged (we didn’t do this). Hopefully they have fixed that flaw. Other than that oddity, the hotel was very nice, and the daily breakfast was quite splendid, although it cost extra.

For any Americans, like myself, who are used to paying for everything with a debit or credit card, it is important to note that cash is practically required in Potsdam (and to a lesser extent, in Berlin). My coworker’s company card had a lower limit on cash withdrawals and he was really struggling toward the end to find restaurants that would accept credit cards.

Also odd to us was the lack of jaywalking. There could be an “Do Not Walk” sign on a deserted street at 2am, and people would stand there and wait. Apparently it is incredibly frowned upon to ignore these rules, around Germany in general.

The city is rich in culture and history, and one of the country’s top scientific centers. From our worksite, we could see St. Nikolaikirche, a Lutheran church in the Alter Markt Square. The church dome, inspired by St. Paul’s Cathedral in London, rises over most of the city, making it an excellent viewpoint overlooking the rest of Potsdam. Badly damaged during World War II, the church was reconsecrated in 1981. Today it hosts community events in addition to regular services. During our second week of work, we took a lunch break to walk over to the church and visit. Climbing the winding staircase to the top was dizzying, but the views were fantastic. 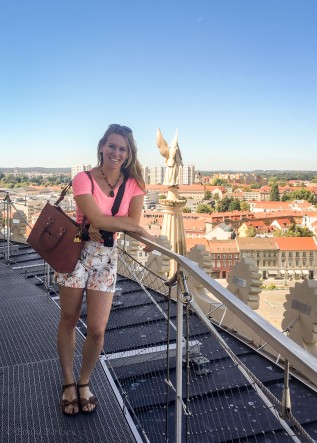 View from the top of St. Nikolaikirche. 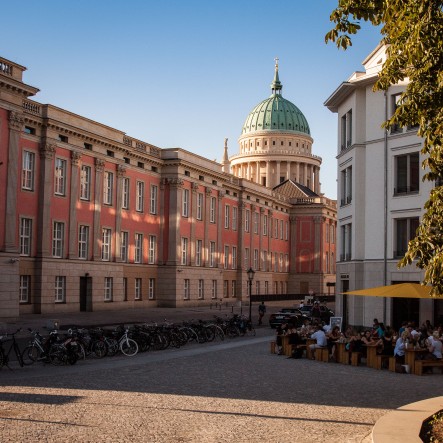 One afternoon, at the recommendation of our Canadian classmates, we took a 1-2 hour long cruise along the River Havel, viewing Park Babelsberg, Wannsee, and the Westlicher Düppeler Forst. The Babelsberg area is home to one of the world’s first major film studios, Babelsberg Studio, which has been producing films since 1912.  In the park sits Babelsberg Palace, which was built for Prince Wilhelm I, the upcoming King of Prussia and later the first German Emperor. The palace was partially designed by the same architect in charge of St. Nikolaikirche. As with most of our time in Germany, the weather was delightful and further complimented by the refreshing beers we ordered. Toward the end of the cruise, we passed beneath the Glienicke Bridge, which connects the outskirts of Berlin to Potsdam. Also known as the Bridge of Spies, it was sometimes used during World War II to exchange spies between East and West Germany. This author of this article seems to have done a similar boat trip along the Havel.

After the cruise we joined several classmates for a delicious Italian meal at L’Osteria, just along the river. On the topic of restaurants, we also had an incredible Italian lunch at Gastronomia Gusto. We were the only customers when we went and the chef was more than excited to offer us custom made dishes. 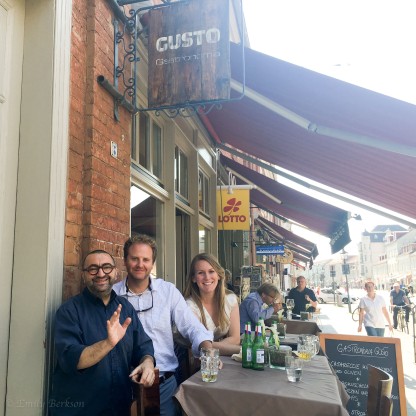 Being a picky eater, I requested some contraption with cheese and chicken. Not wanting to be difficult and not understanding much German, my coworkers opted for the same meal. At a small suggestion from the chef, their requests were modified into something with fish and multiple extra ingredients, which the chef was visibly excited to create. Everyone thoroughly enjoyed their meals.

Below are some additional, miscellaneous photos from the trip, including our hotel, the Alter Markt Square, Brandenburger Tor, and a very excited me showing off my Potsdamer Stanger, the delicious local beer. 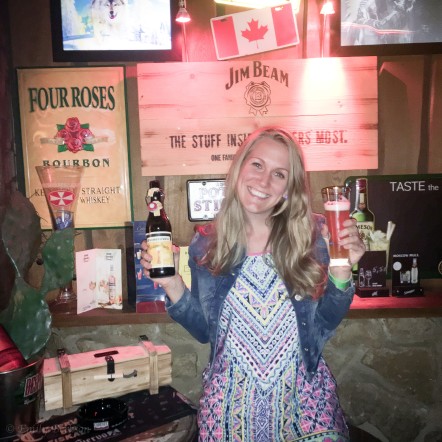 Our hotel, Potsdam Hotel Am Jägertor.

On one of our final days, my coworker and I walked over to the massive Park Sanssouci, which is filled with palaces built under different princes and kings of Prussia, between the mid-1700s and mid-1800s. Now, the park is a UNESCO World Heritage Site. Home to the Sanssouci Palace (summer home of Frederick the Great), Charlottenhof Palace (home to Crown Prince Frederick William), Orangerieschloss (built for King Friedrich Wilhelm IV), Neues Palais (built under King Friedrich II), and Universität Potsdam, the park is a beauty. And surprisingly, not very crowded on a weekday afternoon. It made a perfect before-dinner evening stroll.

These photos are a small subset of my two weeks spent in Potsdam. Although Potsdam is commonly recommended as a day-trip from Berlin, I would highly recommend an overnight here. The slower pace was a welcome change from Berlin, and there are many days worth of sights to explore. That being said, I don’t plan on returning for awhile – if I return to Germany anytime soon I would hope to be visiting Bavaria! Happy travels!